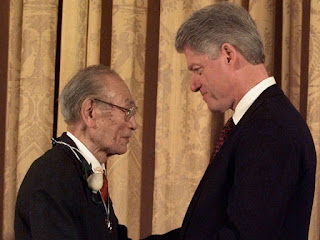 Given the current political and national climate in regard to immigration and the status of the foreign born, especially people of color, the story of Fred Korematsu, a Japanese-American, is of special significance.

It has been over 75 years since Fred Korematsu was arrested on the suspicion that he was Japanese and therefore had not surrendered his personal freedom pursuant to Executive Order 9066 promulgated by the Franklin D Roosevelt (February 19, 1942) -   that directed the immediate and enforced internment of Americans of Japanese descent.  In reality, 110,000 Japanese-Americans were forcefully moved to concentration camps.

Fred Korematsu was walking down a street in San Leandro, California when police arrested him on Memorial Day 1942.  Korematsu subsequently admitted that he refused to comply with this order.  He was a welder by profession born in Oakland, California to Japanese American parents.
Following his arrest, when questioned at police headquarters, Korematsu at first lied about his own personal identity claiming he was Clyde Sarah and of Spanish and Hawaiian ancestry.  In fact, he carried with him an obviously altered draft card with false information.  Eventually, he told the authorities the truth and that his family was in what was euphemistically referred to as a, “relocation camp.”

After this admission, he was forcibly taken to the Tanforan Assembly Center – a former racetrack where 7800 individuals were being held along with his parents and three brothers.  He was placed in what used to be a horse stall with few amenities.  “These camps [are] definitely an imprisonment under armed guard with orders [to] shoot to kill,” Korematsu wrote in a note to his lawyer. “These people should have been given a fair trial in order that they may defend their loyalty at court in a democratic way.”

Over time, Korematsu became determined to challenge his fate in court having some confidence in the capacity of the court system to render a just verdict.  During his trial in Federal Court in San Francisco, Korematsu speaking in his own defense said, “As a citizen of the United States I am ready, willing, and able to bear arms for this country.”  He went on to say that he had registered for the draft and attempted to volunteer his service in the U.S. Navy.  He also stated that he had never been to Japan and could not read Japanese.  The judge in the case, nevertheless, found him guilty of disobeying the removal order and sentenced him to five years probation and was ordered to be taken back to the internment camp.

Although his parents and family were not happy with his decision to defy the Executive Order and despite the general impression that the occupants of these internment camps remained docile, historic evidence gathered since paints a very different picture.  In fact, there were acts of civil disobedience and reported unrest on the part of involuntary occupants in these camps.

Beginning in November of 1942, Korematsu was given leave to live and work outside the camp – this was a partial freedom granted to younger “detainees” of working age.  Finally, in January 1944, near the end of the war, Korematsu was given indefinite leave from the camp.

During this time, Korematsu’s lawyers brought his cast to the Federal Court of Appeals. that ultimately upheld his original conviction finding that Executive Order 9066 was constitutional.  Subsequently, his case came before the US Supreme Court - Korematsu v. U.S. - in October of 1944 and on December 18, 1944 the court upheld the constitutionality of the Executive Order in a 6-3 decision claiming that at the time of the internment there was a “military urgency.”

Three justices wrote minority dissents. Justice Robert H, Jackson wrote, “The Court for all time has validated the principle of racial discrimination in criminal procedure and of transplanting American citizens.” Furthermore he stated that, “The principle then lies about like a loaded weapon, ready for the hand of any authority that can bring forward a plausible claim of an urgent need.”

After the war, when the Korematsu family returned to Oakland, they found their flower nursery in a pitiful state having been neglected by the tenants.  Thousands of detainees felt that on release they would have nowhere to go; therefore, they decided to remain in the camps until they were ultimately closed in May 1946.

Korematsu subsequently married, had kids, and finally moved back to California.  In 1981, evidence was uncovered that the U.S. government had presented fallacious evidence to the Supreme Court in Korematsu’s case and had effectively suppressed information as to the loyalty of Japanese American citizens to the U.S.  Finally, his case was brought back to the federal court in 1983 and his conviction was thrown out.

Following this favorable decision that vindicated him, Korematsu became active in the arena of civil rights and civil liberties.  He lobbied Congress to pass the Civil Liberties Act of 1988, that offered compensation and an apology to former wartime detainees. In 1998, he was awarded the Presidential Medal of Freedom.  Before his 2005 death, he filed a court brief in support of the civil rights of Guantanamo Bay detainees before the U.S. Supreme Court. In 2010, in a tribute to his unflinching and courageous actions in support of basic civil liberties, California made his birthday, January 30, Fred Korematsu Day of Civil Liberties and the Constitution.
Posted by Joseph Aprile at 2:59 PM No comments: