A recent report (2009) indicated that there are currently 40,000 homeless in New York City.  This is a staggering statistic – this number is equivalent to the entire population of a small town.  Given the harsh winters in New York, this is a very disturbing reality.  New York is by no means unique in this regard.  The following table shows homelessness statistics for the entire nation as of 2009.

In addition, there are many millions of individuals at a greater risk for homelessness as the following table indicates 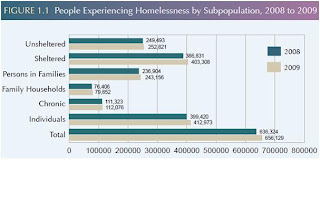 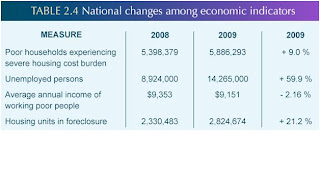 These data clearly demonstrate that the major causes for homelessness are the prohibitive cost of housing, unemployment and poverty - conditions that are further aggravated by housing foreclosures.

Despite the economic downturn, a decrease by 1% in homelessness across America between 2009 and 2011 was found in a report issued by the Department of Housing and Urban Development.  The following were some of the findings issued in this report –

Note – I have purposefully underlined those aspects of the report that I believe warrant special attention.

The horrific state of homelessness impacts men, women, children, the old and the young, the mentally ill and even the handicapped.  There are, in fact, whole families that are homeless.  It is not uncommon for families to be homeless in which the head of the household is employed.  In my mind, there is no justifiable reason for anyone to be homeless in America; the suffering that is endured by so many is wholly unnecessary.  Consider the extent of the waste evident in the federal budget especially in regards to military expenditures and the ludicrous concessions made to corporations with the help of the legions of lobbyists paid exorbitant sums to extricate concessions from an essentially apathetic and pliant Congress.  Consider the vast transfer of public wealth to private hands that has transpired within the last thirty years.  Consider the corruption that is so evident within local governments.  These are governments that often pander to wealth and find all manner of rationales to ignore the plight of so many of their citizens.

National priorities should gravitate around meaningful solutions to societal problems and conditions that lead to unwarranted and unnecessary suffering on the part of those who are effectively economically and politically powerless to change their state of being - with special regard to children.  Homelessness and hunger are issues that need to be placed at the top of the list.  Not to do so, is, in my judgment, morally indefensible.
The state of homelessness in America is evidence of the seemingly pervasive cultural indifference to the living conditions of those less fortunate.  This is a troubling aspect of American life.  It need not be the case, however.  This nation is woefully out of balance.  What is required is a sense of urgency in meeting the needs of those who are in crisis.  What is required is a serious reevaluation of what we, as a people, collectively regards as important and worthy of immediate attention.  In my mind, to ignore those who suffer unnecessarily is to effectively undermine the future.
Posted by Joseph Aprile at 5:15 PM