The Plight of the Native American Peoples of the US

It is a disturbing and unavoidable reality that the westward expansion of the United States during the early stage of its development as a nation was accomplished at the expense of the native populations that occupied these coveted lands.  These native peoples were conveniently viewed as less than human and treated accordingly, resulting in their near genocide.  As a result, they were violently displaced from the land they held as sacred for the sake of the unimpeded and ineluctable occupation by white settlers.

To this day, no substantive apologies have ever been offered and no attempt at restitution made to help ameliorate the suffering that has been imposed on these native peoples and their descendants.  The following is a description of the tragedy imposed upon Chief Joseph and his people - the Nez Perce.

Chief Joseph of the Nez Perce 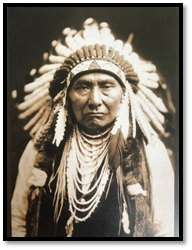 was known to his people as "Thunder Traveling to the Loftier Mountain Heights."

The Nez Perce occupied an area of Oregon referred to as the Wallowa valley in Eastern Oregon. These people were first exposed to white settlers during the Lewis and Clark expedition (1804 – 1806). They were treated with kindness, consideration, and compassion. On this first encounter they were impressed by the technological advances and capabilities these strangers. To some members of the Nez Perce people, they were regarded as superior being whom they wanted to emulate. This embrace of these newcomers, however, would prove to be ofrelatively short duration.

It was not longer after this initial encounter, that the NEZ Perce was visited by Christian missionaries. An exposure to the ways of the white man as exemplified by the lifestyle of these missionaries led many Nez Perce to convert to Christianity.

Joseph’s father, Tuekakas, as chief of the Nez Perce was a convert and as a consequence, Joseph was exposed at an early age to the ways of these foreigners.

Although the homeland of the Nez Perce was remote and hard to reach served as a significant barrier to encroachment by white settlers, this protection was disrupted by two significant events in the early history of the U.S. republic. One was the California Gold Rush of 1848 and the other was Homestead Act of 1862 that granted up to 160 acres of land to those who would establish residence and make the land productive. This act resulted in the settlement of about 1.6 million on land mostly West of the Mississippi.

Although many individuals migrated to California In search of gold, few became rich. When the dream of becoming rich weathered, many were attracted to the West as a place to settle. As a result, these miners began to encroach upon the land of the Nez Perce.

In addition, the push to settle in the vast lands of the West promoted by the Federal government through the enactment of the Homestead Act was thwarted by the presence of Native American populations that were already resident. In the fact of this reality, the government attempted to come to some kind of peaceful arrangement with these populations through the instrument of treaties. However, there was no real incentive to honor the provisions of these treaties, since the newly formed American nation possessed a superiority in numbers and military capability. The historic record is replete with examples of the abrogation of these treaty arrangements.

When Joseph became chief following the death of his father, he naively believed that the U.S. was sincere in its efforts to find peaceful arrangements and would be true to treaty obligations. It is important to understand that the Nez Perce had a strong body of spiritual beliefs in which the land and all that resided upon it were considered a sacred and sustaining aspect of existence and could not be owned, purchased, or exploited. In this light, the attitudes and politics of the white settlers and the US government were inexplicable.

The turning point came In 1877 as a result of the conference held between many of the indigenous tribal leaders and General Howard representing the US government. The meeting was held at Fort Lapwai. It was Howard’s intention to use this opportunity to issue an ultimatum to those Native American leaders invited that they must leave their land and move to designated reservations. They could do this freely or be forced to migrate. The outcome of this conference demonstrated once and for all the unwillingness of the US government to honor its treaty obligations when it was not in its interest to do so. The ultimate conclusion was that Howard issued his ultimatum that the Nez Perce must either move out of their homeland to a reservation defined by the US government within thirty days or be forcefully driven out. When Chief Joseph attempted to suggest that this abbreviated timeline was impossible to adhere to, his entreaties were ignored.

Rather than accept this ultimatum, Chief Joseph fled with his people – there goal was to travel to Canada and remove themselves entirely from jurisdiction of the US government. This represented a 1400-mile trek (see map below) while constantly being pursued by the US army. This was a brave yet futile effort that resulted in the death of many hundreds of his people. He ultimately surrendered in 1877. 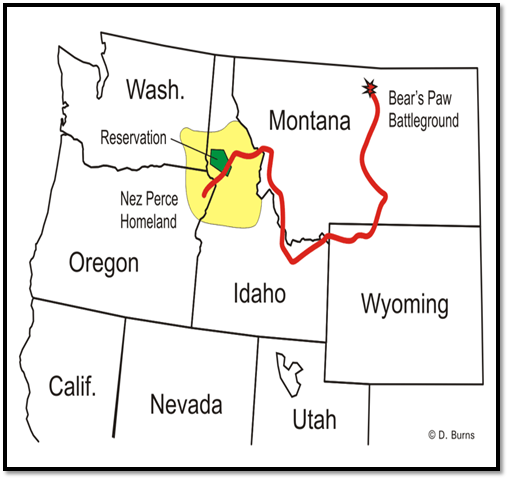 Following the final defeat of the Nez Perce at the hands of the US army, Chief Joseph gave a very poignant and unforgettable speech on October 5, 1877, upon his surrender to General Howard who had been pursuing him and his people for many months in their vain attempt to flee to freedom in Canada. His speech is shown below.

"I am tired of fighting. Our chiefs are killed. Looking Glass is dead. Toohoolhoolzote is dead. The old men are all dead. It is the young men who say, 'Yes' or 'No.' He who led the young men [Olikut] is dead. It is cold, and we have no blankets. The little children are freezing to death. My people, some of them, have run away to the hills, and have no blankets, no food. No one knows where they are — perhaps freezing to death. I want to have time to look for my children and see how many of them I can find. Maybe I shall find them among the dead. Hear me, my chiefs! I am tired. My heart is sick and sad. From where the sun now stands I will fight no more forever."

It is a testament to his timeless courage and unshakeable conviction that there is a town in Oregon (Joseph, Oregon) near Wallowa Lake named after him and the Nez Perce Memorial National Park was created in the same region that is also the site where he is buried. Of course, whether or not the descendants of the Nez Perce will ever be justly compensated for the grave injustice perpetrated against their people is an open question.

The story of this remarkable human being is an extraordinary one.
Posted by Joseph Aprile at 8:36 PM