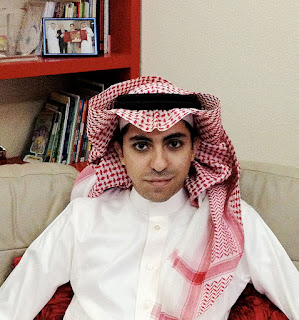 Raif bin Muhammad Badawi gained notoriety when he was arrested in 2012 at the age of twenty-eight for the following crimes: "setting up a website that undermines general security", "ridiculing Islamic religious figures", and "going beyond the realm of obedience.” He was sentenced to seven years in prison. This sentence was increased to 10 years in 2014.

Badawi is a is a Saudi writer actively engaged in advocating for a more liberal social and political environment in his native Saudi Arabia. To expand his audience, he created a website – Free Saudi Liberals.

Badawi's blog had many members. It quickly became a forum for vigorous debate regarding Saudi politics. For this reason, he was arrested in late 2007. Although he was eventually released, he became the victim of constant harassment that eventually led to his subsequent arrest in 2012.

Raif Badawi was born on January 13, 1984, in Khobar, Saudi Arabia. His parents are Najwa, a Lebanese Christian, and Muhammad Badawi, a Saudi Muslim. At a young age, his Saudi grandmother explained to him that, “Saudi society historically was not as strict and men and women used to work together in the fields.”

Badawi's mother died young at an unknown age. He was raised by his father and grandmother in a household beset by economic difficulties. Badawi attended school until the age of thirteen when his father reported him for parental disobedience, a crime in Saudi Arabia, and spent six months in a teenage detention center.

Saudi Arabia is a theocratic monarchy whose laws and regulations follow the rulings and teaching of Islamic law. The legal system is based on sharia as interpreted by Sunni Islamic jurisprudence. The government is under the leadership of a king and prime minister. Furthermore, the royal family rules by fiat, and there is no Constitution.

Wahhabism is an Islamic revisionist theology that exerts a powerful influence in Saudi Arabian politics. It derived its name from the teachings of Muhammad ibn Abd al-Wahhabi. Wahhabism is an extremely stringent and uncompromising from of Islam that insists on a purely literal interpretation of the Koran. Through this highly restrictive interpretation, those who do not practice this form of Islam are considered heathens and are dealt with harshly. In Saudi Arabia apostasy itself is considered a crime worthy of the death penalty.

Badawi was influenced by the writings of progressive Arab author, Abdullah al-Qasemi, and Turki al-Hamad, a noted journalist and thinker. He was particularly inspired by Mohammed Saeed Tayeb, a staunch believer in democracy who was also imprisoned.

Ultimately, he became so concerned about the oppressive and authoritarian nature of Saudi politics that he began to speak out openly in regard to these concerns. For this reason, Badawi’s activities were considered by the government as anathema and explains the severity of the punishment he has been forced to endure. Badawi’s courageous insistence on expressing his views has been regarded as a particular threat, for the government’s autocratic imposition of Islam on the lives of its people is especially vulnerable in the human world of the twenty-first century in which global communication is a predominant aspect of modern life.


He has been reported to be in poor health, and his general condition has noticeably worsened during his imprisonment and torture according to his wife, Ensaf Haidar, currently residing in Canada. She fled her native country convinced that her life would be endangered if she remained in Saudi Arabia.


The following interview with Ensaf Haidar was conducted by Jaafar Abdul Karim at Deutshe Welle (dw.com) in 2017.


Ensaf Haidar: The fact that my husband has been in jail for five years shows that there is no freedom of expression in Saudi Arabia.

Raif expressed his opinion in a friendly and peaceful manner, so there was no reason to be afraid. He had also written for Saudi newspapers, and that shows that he wasn't an enemy of the state. He even had the experience of traveling abroad.


So why are some states so afraid of these independent spirits?

Because of the different opinions. It's us they're afraid of, not the expression of opinion as such.


So they would prefer there to be only one opinion?

This is what their approach suggests. They want everyone to be of the same opinion. They're afraid of a wide range of opinions.


How is your husband doing at the moment?

After five years in captivity separated from his children and the outside world, he's naturally doing poorly physically and psychologically. He has been imprisoned for five years without having committed a crime.


Of course, the Saudi authorities see the situation differently. What do you tell your children? Do they understand what's going on?

They understand it and are proud of their father, though they miss him very much. They need him, especially at this age.

In the beginning he always called me for brief periods of time, but I haven't heard anything from him in over three weeks.

If we had press freedom, Raif would be free. He's been in jail for five years and he'll be there for five more. Along with that he's also been handed a 10-year travel ban, a fine of one million riyal ($266,654 USD) and 1,000 lashings by cane. Anyone who sees this sentence can decide if we have press freedom here or not.


How important then is freedom of expression?

There are people who say there is already too much division; there's terrorism and there's foreign interference, which undermine a country's sovereignty.

Those who speak peacefully and know the laws have the right to express themselves! That is a basic right of every person, whatever the subject.


Do you speak with your children about freedom of expression?

That is a social issue and not just a legal one. From society as well there is a partial rejection of freedom of expression…

Here in Canada it is, of course, completely different. It's a secular country, where you can express your opinion freely, directly in the press. When I tell my kids about their father, they don't understand what the problem is at all with someone having a blog. It's completely different here.


There is an international solidarity campaign for your husband. How does that make you feel?

I can only be thankful and hope that the initiators continue with it. However, so far it has had a psychological effect. It hasn't impacted the proceedings against Raif so far. But I hope that the solidarity continues nonetheless, because moral support is so important. That gives Raif and me hope and strength.


Do you personally hope that pressure from the campaign will help free Raif? It is now an international campaign.

I hope that the Saudi government one day recognizes that freedom of expression is every man's right. Raif always peacefully expressed himself and loved his country. In this way I hope that he soon comes free.


What is your appeal for World Press Freedom Day?

I hope that the whole world continues to stand by us. I call on the Saudi government to give every citizen a space for freedom of expression.


Badawi is currently represented by The Raoul Wallenberg Centre for Human Rights that acts as his international legal counsel. The mission statement of this organization is the following as presented on their website (raoulwallenbergcentre.org).


“The Raoul Wallenberg Centre for Human Rights is a unique international consortium of parliamentarians, scholars, jurists, human rights defenders, NGOs, and students united in the pursuit of justice, inspired by and anchored in Raoul Wallenberg’s humanitarian legacy – how

“From mid-May to early July 1944, the Nazis deported 440,000 from Hungary to the Auschwitz Birkenau death camp – one of the most efficient, cruelest, and most horrific mass deportations in the Holocaust. Raoul Wallenberg arrived as a Swedish diplomat in the Swedish legation in Budapest in July 1944 and in six months saved 100,000 Jews.

“The Wallenberg Centre is organized around five pillars of pursuing justice, each of which reflects and represents Wallenberg’s humanitarian legacy. The Honorary Co-Chairs of the Raoul Wallenberg Centre for Human Rights are: Nobel Peace Laureate Elie Wiesel (U.S. – in memoriam); the Honorable Justice Rosalie Abella (Supreme Court of Canada); the Honourable Göran Persson (former Prime Minister of Sweden); and the Honourable Elyakim Rubinstein (Former Deputy President of the Israeli Supreme Court). The Centre’s Founder and International Chair is Professor Irwin Cotler and the Co-Chairs from countries of Wallenberg’s Honorary Citizenship include Jared Genser (US); Michael Danby (Australia); and Natan Sharansky (Israel).”


The goal of this organization is to use the global media as well as private diplomatic efforts to help secure Badawi's release from prison.

According to this organization, “Raif Badawi has been languishing in a Saudi prison since his arrest in 2012, and his subsequent sentencing in 2014 to 10 years imprisonment and 1000 lashes, itself constitutive of torture and a standing violation of International Human Rights Law. Badawi's "crime"? Establishing an online forum and exercising his right to freedom of expression. Despite Saudi Arabia expressing an interest in reforming and modernizing, Raif Badawi – an advocate of liberalism and tolerance, and the champion of these changes – remains imprisoned and separated from his wife and three children, now citizens of Canada.”


While his exact location is unknown, it has been reported that Badawi is currently imprisoned in Dhahban Central Prison.


Following the 2012 arrest, Amnesty International designated Badawi a prisoner of conscience. As reported on their website – amnestyusa.org,

“In May 2014, Raif Badawi was sentenced to 10 years behind bars, 1,000 lashes, a 10-year travel ban, and a lifetime ban from appearing in the media. He was convicted of violating Saudi Arabia's draconian information technology law and "insulting Islam." The conviction stems from number of articles Raif wrote and published on his site "Saudi Arabian Liberals," which he founded as a forum for social and political debate. Raif also refused to remove other Saudi writers' articles from the site.


“The charges against Raif are related to articles he wrote criticizing religious authorities in Saudi Arabia, and pieces penned by others that Raif published on the Saudi Arabian Liberals' site. The prosecution had called for him to be tried for 'apostasy' or abandoning his religion, which carries the death penalty.

“Raif is one of many activists in Saudi Arabia persecuted for openly expressing their views online. Facebook and Twitter are incredibly popular in a country where people can't openly voice their opinions in public. The authorities have responded to this increase in online debate by monitoring social media sites and even trying to ban applications such as Skype and WhatsApp, further stifling free expression.”

Badawi’s unshakeable determination and remarkable courage as an advocate of human freedom and the right to express one’s views openly are of great value to us all, and a reminder of the inherent power of the human spirit.
Posted by Joseph Aprile at 8:41 AM