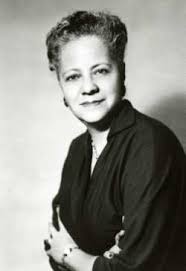 Anna Arnold Hedgeman was born in the late 19th century (1899) in the small town of Marshalltown, Iowa.  As a small child, her family moved to Anoka, Minnesota – they were the only black family in their local community.  Her parents, William James Arnold II and Marie Ellen (Parker) Arnold, placed a great deal of value and importance upon education and scholarship.  They were also active in their community, and Hedgeman did not experience any notable discrimination while growing up.  However, she was to feel the full weight of racial prejudice later in her adult life.

Following her graduation in 1918, Hedgeman continued her education at Hamline University In Saint Paul, Minnesota – a private liberal arts college founded in 1854.  This university places a strong emphasis on experiential learning, service, and active engagement in issues of social justice.

As a student at the university, she attended a lecture given by Dr. W.E.B. DuBois – a famous sociologist and historian (1868 – 1963) - that she found inspirational and helped direct her aspirations towards a career in education.  She graduated from Hamline University in 1922 with a Bachelor of Arts degree in English.  She was the first person of color to earn a degree at Hamline University.

One of her first positions post-graduation was a teaching position at Rust College in Holly Springs, Mississippi. Rust College is an historic black college founded in 1866 during the brief period of post-war Reconstruction (1865 – 1877). During her stay in Rust College in the heart of the Deep South she suddenly experienced the full impact of Jim Crow (as discussed previously). She was awakened to this reality even before she arrived in Mississippi by train, for she was obliged to sit in the “colored” car behind the locomotive and was denied access to the dining car on account of the color of her skin as soon as the train departed from the Cairo, Illinois train station. This demeaning experience sharpened her awareness of the true nature of racism within the United States.

After two years at Rust College, she moved back to Minnesota to find racial barriers confront her when she tried to find a teaching position. In 1924, she accepted a position as executive director of the black branch of the Young Women’s Christian Association (YWCA) in Springfield, Ohio; she remained in that position until 1938.

For the following ten years she worked at a number of high-level positions including serving as the Assistant Dean of Women at Howard University. By 1948, she turned her attention to a political career and worked for the Harry Truman campaign for President of the United States, and went on to become the first black woman to serve on the cabinet of then New York Mayor Robert F. Wagner Jr. In this role, she gained a reputation as a strong advocate for civil rights and was recruited by Philip Randolph and Bayard Rustin to plan and coordinate the 1963 March on Washington that was highlighted earlier in this book (see the chapter devoted to John Lewis). Serving as the Coordinator of Special Events for the Commission of Religion and Race of the National Council of Churches, Hedgeman convinced some 40,000 Protestants to participate in this march on August 28, 1963, that brought hundreds of thousands of individuals to the nation’s capital.

On account of her wide-ranging experience and professional career especially in regard to her inexhaustible advocacy in the area of equal rights for African-Americans, Hedgeman became a sought-after lecturer at black colleges and universities throughout the United States. She authored a number of books that highlighted her efforts including, The Trumpet Sounds (1964) and The Gift of Chaos (1977). Hedgeman died on January 7, 1990.

As an African-American woman, Hedgeman came to understand the deleterious impact of racism on the lives of people of color within the United States and dedicated herself to help make substantive changes in this cultural dynamic that remains a persistent aspect of the national landscape.
Posted by Joseph Aprile at 8:41 AM